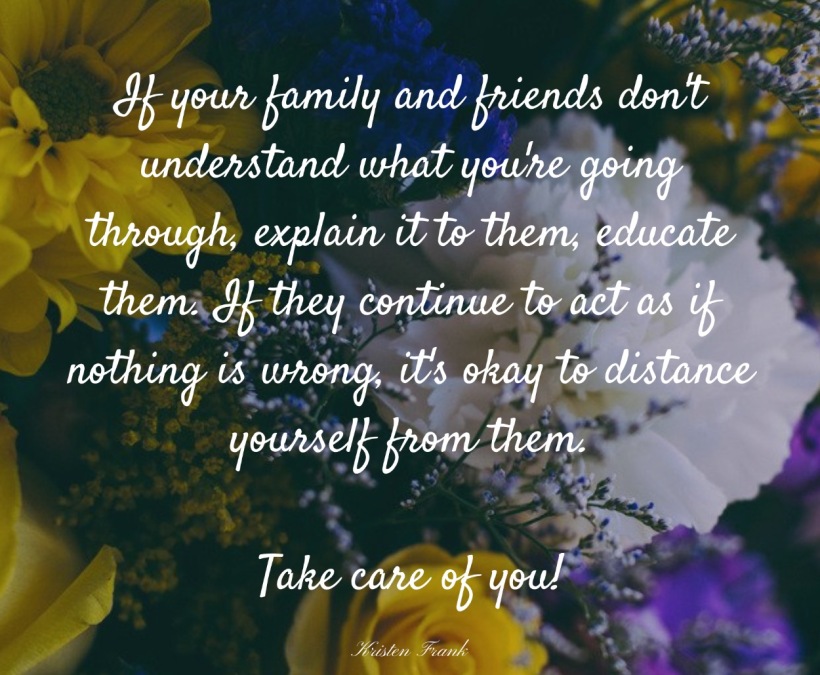 Oh, the planning involved for the perfect tattoo. What do I want, where should I put it, what does it mean to me and on and on and on. I have so many saved ideas of my next one, but until it’s perfectly decided it will be put on hold.

After we’ve placed that piece of permanent art on our bodies, we’re proud! We want to show it off and are glad to answer questions about what it means. Each one has a meaning, a story to go with it, it’s a symbol or personal statement.

I have 7 tattoos that were all carefully thought out, but two that I had no choice in. A two inch “permanent frown”, as I call it and another two inch “zipper”; both a result of surgery. If they were visible, I would talk about them. As with our favorite tattoos, each scar has a special meaning, a story to go with it, a lesson learned, a sign of healing and survival. Why wouldn’t you want to talk about that?

Was there pain involved? Probably, and maybe still.
Some are worse than others, in places we don’t want to look at. Hideous and embarrassing, I’ve heard it said. But why? You now have yet another marking that makes you totally unique, something you didn’t have before? Isn’t that a good thing? 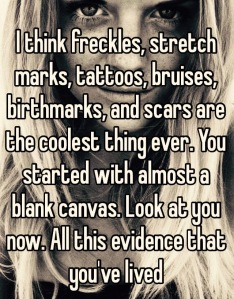 As we move along in this world we accumulate all kinds of things that mar our insides and outsides. Bumps and bruises, freckles and laugh lines, friends and enemies, broken hearts and unfulfilled promises. We all have the same things, some choose to show all and others try to cover and hide. All signs of an exciting, fun filled, sometimes scary, unpredictable life that we decided to live out to the fullest.

Next time someone is staring at you and you know they want to ask what happened, just realize they want to hear a good one. Tell them, “See this? This was a doosey!” Give them your story or your words of wisdom. See if they have any, I’m sure they do. If you think they are looking at you with pity, they’re probably thinking how strong and brave you must be; a warrior for sure! 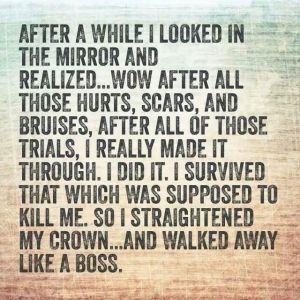 When I see someone with any kind of, I’ll call it “life induced markings” on their body, I want to hear the story. How did it happen? How did you survive? Would I be that strong? I have an admiration and sense of awe for them. I see them as those special inspirational people that were put before me to raise my game, to know if they can do it so can I.

Ask any tattoo artist how excited they are when they see some virgin skin walking in or a painter with a blank canvas. You can’t leave it that way for long, who wants to look at a blank page? Fill it up, mark it up, make it something to talk about! 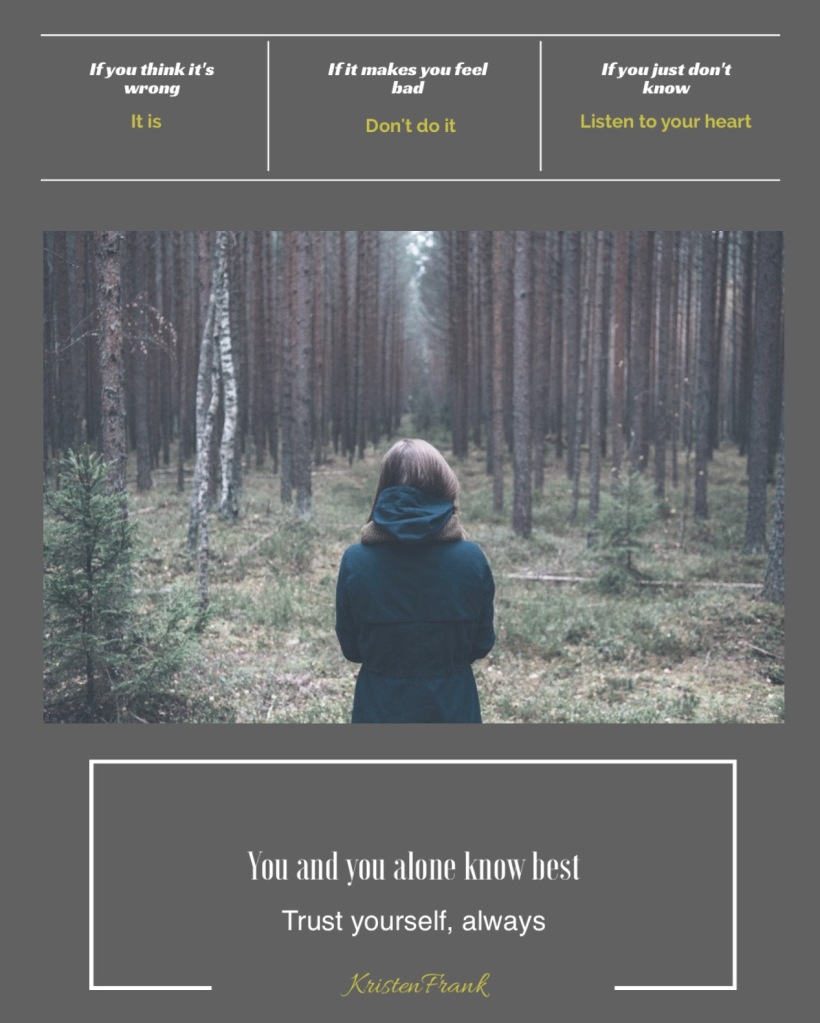 I promise, it’s not hard!

So, what can we do today that will start our week off on the right foot?

I’m going with, making someone else smile or doing something for someone else for no reason at all! If you’ve never done this, it’s really motivating and not only makes the other person feel good, but you as well.

I know we have all heard of the standard pay it forward, random acts of kindness but let’s try to get creative and think outside of the box. Maybe we can even try to keep it up for the WHOLE week, imagine being nice for that long!

Here are some ideas to get you going:

If you really want to challenge yourself, pick an act of kindness to use on someone you really don’t care for, or a complete stranger! 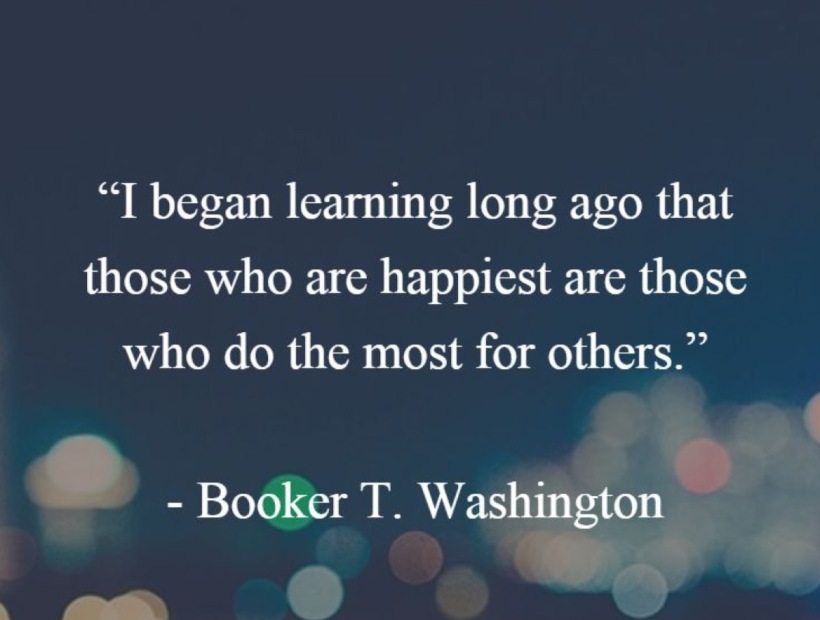 Please share any good ideas you have or the outcome of your random acts of kindness!

We all have them, those days when everything sucks…

You just don’t look good,
your clothes don’t fit right,
you hate your job, your family and yourself;
and to top it off, you have no money!

Getting out of that funk can be really difficult, especially when it seems never ending. You’re tired, fed up, discouraged and generally, just DONE!

“This will get better”
“You’re just having a bad day (week, month or year)”
“It could always be worse”

My go to has always been, “It could always be worse”, think about it – couldn’t it?

This is one strong and amazing woman! She endured and stayed positive and did what she had to do to survive. She helped to keep the other victims (Amanda Berry and Gina DeJesus) alive and gave them hope and strength to keep going until they were rescued!

This is who I think of when I think things are bad or I’m feeling sorry for myself. She wasn’t a famous superstar, she was just a regular girl trying to get along in this world like the rest of us.

I constantly see women fight through impossible situations and never give up. As a woman, this makes me so proud to know how strong, stubborn and smart we can be. We can fight through anything and survive, often times coming out better than we were.

Who are the women that inspire you?

Look around and I bet you can think of at least 5 in your own inner circle.

THE OWL
My proposal as a national symbol for Women 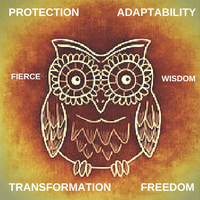 Some other awe inspiring women below – If you aren’t familiar with them, look them up and read their stories. Imagine yourself in their place, would you fight and hang on and persevere and do what it took to survive?

Of course you would…

You’re a woman, nothing can stop us!

Liz Murray – Parents were drug addicts and eventually died from AIDS.  At 15 became homeless, but despite all of her hardships she attended Harvard University and today is a very successful inspirational speaker.

Helen Keller – At 19 months old contracted an illness that left her deaf and blind. Come on, I can’t even…

Elizabeth Smart – Abducted at age 14.  Raped, tortured and threatened with death for 9 months. She is now an American Activist and a missing persons commentator for ABC News.

And so many others…